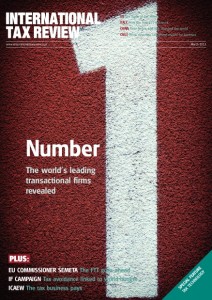 My editorial from the March issue of International Tax Review.
It has been a busy month for tax reform with the European Commission announcing the details of how its financial transaction tax (FTT) will look under enhanced cooperation, as EU Commissioner Algirdas Šemeta writes in this issue.

But by far the most important document to have emerged is the OECD’s report on base erosion and profit shifting (BEPS), a tentative term which essentially means tax avoidance.

The cautious language the OECD uses to address such a significant issue is indicative of the report’s importance. In laying the groundwork for a comprehensive action plan, the organisation wants to bring taxpayers, activists, advisers and authorities together to reform an international tax system that is almost a century out of date. Their approach appears to be working.

As one taxpayer told International Tax Review, the OECD’s focus on analytical data is a welcome step for a debate that has been largely driven by media headlines.

Meanwhile, the Tax Justice Network, which has in the past been highly critical of the OECD’s approach, hailed a “milestone” report in which nothing – not even their panacea of unitary taxation – is left off the table. They even went so far as to say that they could have written the report themselves.

That both sides of a traditionally polarised debate have been able to find so much common ground in the BEPS report in part owes to the fact that the OECD tries to produce material that reflects a broad range of views. But it is far more than a Rorschach test.

Fundamentally, the international tax system is at risk of breaking apart under the strain of aggressive tax competition and avoidance, leading to falling revenue for cash-strapped governments and uncertainty and risk for businesses looking for a level playing field. It is in everyone’s interests that this system is fixed and in bringing all sides to the table, the OECD has taken a vital step forward.

BEPS hails the dawning of a new era for discussion on tax reform.

The report highlights the need for greater transparency and a number of key pressure points such as entity and instrument characterisation; application of treaty concepts to profits derived from the delivery of digital goods and services; the tax treatment of related party debt-financing, captive insurance and other inter-group financial transactions; transfer pricing; the effectiveness of anti-avoidance measures; and the availability of harmful preferential regimes.

All of these will need to be looked at in detail, with active participation from governments, businesses, advisers and non-governmental organisations before the OECD comes up with its action plan