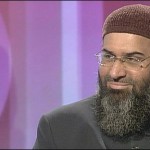 Except he doesn’t. This is just another pointless and misleading headline in today’s Metro. Another nothing story to squeeze a little bit more moral panic juice out of the upsurge in anti-Muslim sentiment.

Under the headline “Extremist preacher faces arrest”, the Metro goes on to report that “Muslim preacher Anjem Choudary will be arrested as soon as he breaks hate laws, a senior police officer warned yesterday.”

So he’ll be arrested if he breaks the law – just like any other British citizen.

The Metro’s headline makes little more sense than saying Noel Edmonds faces arrest for murder if he breaks the murder laws by murdering someone. Only to the media and to the public anger it is fuelling it does make more sense – because Choudary is a Muslim.

The story continues to report: “The Met’s Asst Comm Cressida Dick said: ‘We are working with the CPS to ensure, if he breaks the criminal law, we deal with it very swiftly’”.

There’s that key word again, if.

No doubt Choudary has some odious beliefs and his comments following the Woolwich murder were disgusting. But he’s savvy enough to know where the line of hate speech sits and how to walk as close to it as he can without crossing it.

But this is not really about one man with some distasteful views on the world. It’s about how the media reports on Muslims.

The papers can decry the rise of EDL thugs all they like, but as long as the media is singling out Muslims as special cases to be reported differently from the rest of society, it is lending legitimacy to exactly the kind of “us and them” culture that feeds the rise of Islamic extremism and white racism.