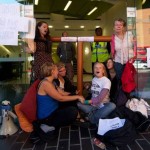 On my way to work on Monday I was curious to see a small group of anti-fracking protesters superglued to the entrance of Bell Pottinger, the PR firm used by energy company Cuadrilla.

The irony is, better PR is exactly what anti-fracking activists need.

The protesters had brought with them signs bearing the slogan “fracking liars” and various other well-worn puns swapping the word “fuck” for “frack”. But I couldn’t see anything that clearly communicated why they were targeting Bell Pottinger in particular. Indeed, while the protests gained widespread coverage, there was little in the media that conveyed the activists’ precise beef with Bell Pottinger. Given the natural bias of the mainstream media against direct action, it is vital campaigners do everything they can to get their message across.

According to my friend Helen Robertson, who was reporting from the protests for Petroleum Economist, the activists’ arguments against fracking were largely derived from the film Gasland. Irrespective of the fact the documentary’s assertions have been widely disputed, campaigners would be wise to arm themselves with robust facts and figures as well.

Helen’s main point was that with UK gas production falling, the country is increasingly turning to cheaper and more polluting coal, a problem fracking might address.

When she asked one protester if she knew how much coal Britain uses, the activist replied: “I’m hopeless on facts”.

This is a clear issue for the anti-fracking movement, and protesters in general.

In the age of social media and blogging, when any activist can have a smart phone shoved in their face at any moment and see their words splashed across the internet minutes later, it is even more important for campaigners to turn up to demonstrations equipped with cold hard evidence and the media savvy to communicate it effectively.

I support the anti-fracking movement, primarily because looking to shale gas and oil to plug the energy gap shirks the responsibility to dramatically expand clean renewable energy production. It is here that activists can find their strongest arguments – and no doubt many make them – backed by a wealth of scientific evidence behind the threat of anthropogenic climate change.

Ideology and zeal are vital to any movement, but a heart in the right place is no substitute for a head full of facts to back it up.

If you’re going to superglue yourself to a doorway where you can’t dodge journalists’ questions as easily as greedy corporate bosses hopping into a limousine, make sure you have the answers.