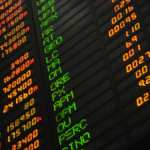 Eleven EU member states are pushing ahead with a plan to introduce a tiny tax on financial transactions. Four of Europe’s five largest economies are among them. Guess which one is missing?

The UK House of Lords EU Subcommittee on Economic and Financial Affairs this week came out railing against the financial transaction tax (FTT), which would place a 0.1% tax on trades in shares and a 0.01% tax on derivatives trades. George Osborne described it as “economic suicide”.

He is wrong. Not adopting an FTT would be economic suicide.

Firstly, we need mechanisms to ensure the greatest financial crisis and worst economic downturn of our lives never happens again. This is not about punishing the banks for their role in causing the crisis. It’s about ensuring responsibility from our financial institutions. The FTT is part of this process, slowing down the financial system and discouraging risky, speculative transactions. By encouraging the markets to shift to longer-term investments, the FTT will help make them safer. One only needs to look at the fall of Lehmann Brothers. By making short-term repos more expensive, the FTT will discourage re-hypothecation of capital and therefore reduce the creation of the type of house of cards which collapsed so spectacularly.

Yes, the FTT would be an added cost to financial institutions. But how much greater the cost to financial institutions and businesses the world over has the crisis been? Not to mention millions of people in Britain who have as a result seen their wages squeezed, their taxes increased, their cost of living rise, their public services torn apart and their lives made worse. We need to ensure this never happens again.

Secondly, we must turn to the question of the tax as a revenue raiser. There have been some wild estimates of how much the European Commission’s model of an FTT might raise. Indeed, if it works effectively to discourage the riskiest transactions, the FTT may end up raising less than the Commission’s initial estimates. But it’s important to note this is not all pie in the sky thinking. Over 30 countries have some form of financial transaction tax. Brazil has raised £10 billion a year through their broad-based FTT, while the UK stamp duty on shares raises around £3 billion each year. $50 billion in total is raised each year across the globe.

Even if Commission revenue estimates are not fully realised in practice, any revenue raised after the FTT has achieved its purpose of constraining risky transactions is a bonus and a social good. The obvious comparison is a carbon tax. We levy carbon taxes to limit environmental destruction. Ideally we would want companies to pay as little of the tax as possible by polluting less. But what is raised after that can be put to national and international good.

Opponents of the FTT claim financial institutions will flee. Look at Sweden they say. London will be burning. The City of London is not going anywhere. It didn’t disappear when we taxed high earners at 50%. It didn’t evaporate when we taxed bankers’ bonuses. It never fled when corporation tax was in the 30s and higher. And we’ve levied stamp duty since the 17th century. London enjoys geographical and time zone advantages, a skilled and educated workforce, political stability, vital infrastructure and a concentration of financial institutions which, according the cluster theory, must stay together. If nothing else, the cost of relocation will be far higher than paying the tax. Nor would it do much good. Wherever people trade in the world, the tax will be captured.

Opponents of the FTT claim it will be impossible to collect. Well, if that is the case, what are they worried about? I suspect the lady doth protest too much.

Opponents of the FTT claim it will hit pension funds. Well, pension funds should not be aiming for short-term speculative trading, it’s not in their nature and it’s not going to work. If anything, an FTT would make pensions safer and more secure, while lowering management costs.

George Osborne’s alternative is to put the burden of economic recovery on Britain’s poorest people. This is not only unfair, but makes poor business sense.

Let us have an FTT. Let us make the banks repay some of the cost of the crisis. And let us ensure it never happens again.

Credit goes to Richard Murphy and the Robin Hood Tax Campaign for helping me research this article, which forms part of a speech I gave to a room full of bankers this week. It did not go down well.