Did Nick Clegg receive a spine for Christmas, or just a second face? 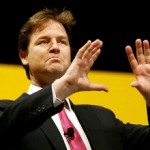 Either it’s an election year, or Nick Clegg has suddenly discovered some principles.

This week, George Osborne announced that there would be another £25 billion in spending cuts after the 2015 general election and around half of that would come from the welfare budget.

For Clegg, who must have been given a spine at Christmas, it was apparently the straw that broke the camel’s back.

Clegg denounced his coalition partner’s latest round of cuts as “lopsided”, “unbalanced” and a “monumental mistake”.

“You’ve got a Conservative party now who are driven, it seems to me, by two very clear ideological impulses,” class warrior Clegg said. “One is to remorselessly pare back the state – for ideological reasons just cut back the state. Secondly – and I think they are making a monumental mistake in doing so – they say the only people in society, the only section in society, which will bear the burden of further fiscal consolidation are the working-age poor.”

This, it would seem, stands Osborne’s proposed cuts in stark contrast to all his other austerity measures, which presumably Clegg considered fair and progressive.

One has to assume that when Clegg voted for the bedroom tax – a policy so toxic that it has made 660,000 people living in social housing more than £700 per year worse off, pushing people to arrears, eviction, self-harm and suicide – he did not feel it was much of a burden on the poor.

I suppose, when Clegg increased tuition fees to £9,000 after pledging not to raise them, he didn’t feel this was a monumental mistake for Britain’s already debt-burdened students, or for his own party’s fortunes.

When he supported workfare, the VAT increase, the benefits cap, the corporate tax cuts, and the abolition of the 50p tax rate for the highest earners, he must have had some inner insight none of us were privy to that these were not lopsided or unbalanced measures.

And when he backed the rip-off privatisation of the profitable Royal Mail and the carving up of the NHS – the last of the family silver to be sold off – he must have thought these were sensible economic decisions taken in the interests of the majority of British people, not a remorseless paring back of the state for ideological reasons.

I mean it’s not like Clegg’s suddenly discovered his erstwhile progressive principles and set out to put clear water between him and the Tories’ most rabidly free-market policies just because the European elections – where the Liberal Democrats face a wipeout – are looming. And it couldn’t possibly be because next year will see a crucial General Election in which the Lib Dems could once again hold the balance of power, if only they can hold onto their seats, could it?

Clegg may have rediscovered his woolly liberal coat in this winter of discontent, but let’s not forget that he and his party are every bit as responsible as Cameron, Osborne, Iain Duncan Smith and the Conservative Party for the austerity policies that have made the lives of millions of Britain’s poorest and most vulnerable people considerably worse.

Quibbling over the enormity of Osborne’s latest plans, which conveniently are not scheduled until after the Coalition is no more and Clegg is not bound to back the government, cannot wipe clean Clegg’s pathetic record over the last three and a half years.

Nick Clegg did not receive a spine this Christmas, only a second face. The sooner it is back on the back benches, the better.