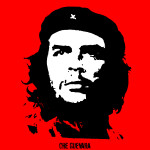 On this day in 1967, Ernesto ‘Che’ Guevara was executed by the Bolivian army on the orders of the CIA.

Guevara the man was deeply flawed and far from a saint. But to millions, Guevara is not a man, he is an idea epitomising resistance to oppression. The romantic freedom fighter. Nothing encapsulates that notion better than his (perhaps apocryphal) last words:

I know you are here to kill me. Shoot, coward, you are only going to kill a man

A fictionalised version of of his death appears in the opening chapter of my novel, Children of the Sunset. Not as a tribute to the man. But a recognition of the truth of those words. That you can kill a man. But you can’t kill an idea.