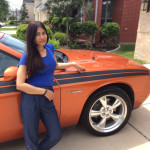 “How many chances does this man get?” Somi Guha asks incredulously on the day that Clarkson “begs forgiveness” for apparently not trying hard enough to not say the word “nigger” despite doing “everything in his power” to avoid saying it.

Clarkson’s apology is too little too late for Guha who now wants the BBC to sack him.

“If not, the BBC should just state openly that they are okay with racist broadcasts and a culture where racism is part of everyday fun,” says Guha. “Do you remember that Big Brother contestant who was removed from BB for using the n-word and that was for quoting something from a song. It’s as though Jeremy Clarkson is untouchable.”

Before The Mirror broke the scandal, Guha was already threatening to sue the BBC over Clarkson’s use of the word “slope”, a derogatory term for South Asian people.

The actress made a complaint through Equal Justice solicitors because she understood the racism that had been scripted and masked in the Top Gear Burma episode.

“Most people who aren’t in the entertainment industry wouldn’t be aware of the amount of preparation required to set up a scenario on productions,” Guha explains. “The shot with the local Asian man on the bridge was premeditated and scripted specifically to work as a racist slur. It would have taken quite some effort for that gag to work while at the same time making it look off the cuff and coincidental.”

“It was not even casual racism,” she adds. “It was covert racism which makes it all the more disturbing.”

“It’s as though the Top Gear guys are saying “this is our patch and we can say what we want and if you try to stop us we’ll find a way to get around it”. Even though I was intimidated, I felt I needed to make a stand.”

The initial complaint also recalled the offensive comments made by the Top Gear team about Mexicans in an earlier episode. Guha says the producers have apologised but have feigned ignorance.

“Bernard Manning was demonised for his racist humour and his brand of jokes have been consigned to the 1970s, but the BBC are allowing the same brand of humour in disguise to creep back on our TV screens but labeling it harmless fun,” Guha says. “It’s as though racist jokes said with a working class accent are racist and taboo but said with a posh public school accent – they are harmless schoolboy buffoonery.”

Guha has sent a new complaint to the BBC in light of Clarkson’s latest alleged comments. Her lawyer has asked the BBC for a fresh investigation to be carried out on all three matters.

“It’s clear that Mr Clarkson sees it as a sport to use as many racist terms and as much racist material he can get away with,” Guha says. “This last revelation really doesn’t look like he’s in it for the light-hearted pranks his supporters offer as excuses.”

An apology is not enough

Guha wants more than just an apology from the BBC. She argues that the BBC apologised for the humiliating description of Mexicans but explained it away as part of acceptable national stereotype- based humour which Top Gear fans understand.

“This implies that the rest of us need an operating manual before watching Top Gear so that we “get it”,” Guha says. “In order for something to work as stereotype based humour, both sides have to be involved in the game. The one-sided humiliating stereotyping of Mexicans from Richard Hammond, rounded off by Mr Clarkson’s further offensive comments, was an attack that Mexicans weren’t prepared for.”

After that apology, Guha argues Top Gear then scripted the racist slur that targeted a person of Asian descent. Again, she says, this person was not in on the game because he was not given the opportunity to respond in an equally offensive or witty way to the Top Gear team.

“If Top Gear wants to “play”, let the others play back. Their idea of humour seems to be a series of set-ups where they throw eggs at or punch passers-by who are unaware of the ambush while the Top Gear team run away sniggering like school boy bullies.”

Following Guha’s initial complaint, the BBC again offered an apology for the “slope” slur, admitting it was premeditated wordplay but claiming it had no idea it was offensive.

This explanation doesn’t wash for Guha.

“It is because they knew the word is offensive that Richard Hammond tried to disguise it with an over-explanation of the state of the bridge,” she says. “It’s now become a game of broadcasting racist material followed by an apology with progressively unbelievable explanations. No one’s buying it. And now a third strike with the use of the n-word, the BBC cannot pass it off as ignorance or coincidence or national stereotype based humour. The n-word is a globally recognised no-go zone and Mr Clarkson used it. The apologies are insincere. Surely it’s three strikes and you’re out!”

Gap in the market

As an actress, who has previously appeared in Children of Men, Guha admits that complaining about the BBC could hurt her career.

“But what career was I allowed to have?” she asks. “As an actress of ethnic origin, the roles are few and far between. A few appearances here and there is hardly a career. I made the mistake of reading the comments from the fake twitter account set up in my name that mocked me, saying I was a ‘failed actress’. How can I fail when I haven’t been allowed in? I’m tired of knocking on doors that won’t let me in. I’ll build my own house.”

Guha has been writing and producing her own work since 2007 and she hopes to put on her first stage play Revolution in a Catsuit, which opens with the female lead turning to the BBC to help revolutionise the acting industry. Of course, Guha says, it all goes horribly wrong.

Guha has been working with Director Tim Stark who has sent her play to the Finborough Theatre for consideration.

“The BBC should know that in my play I hold them in a good light so hopefully they won’t hold it against me for making a stand in this real life issue,” Guha says. “But then again, who am I kidding? By the way, the Top Gear trio make an appearance at the corridors of the BBC in my play!”

According to Guha, there is a gap in the market for race-based humour where British ethnics are shown as strong, sassy characters who are part of the mainstream and not just there as stereotypes or as characters having to explain their presence by over-stated ethnic issues or be the butt of regurgitated jokes while sitting by silently.

“I don’t live like that and I’m not okay with being part of those same-old, same-old plots,” says Guha.

The complaint has now gone to Ofcom. Guha cannot see, given Clarkson’s latest scandal, how the BBC can continue to defend him. She hopes it will not ruin its globally recognised and much-loved brand.

If the case goes to court and Guha is successful, she will not be taking any of the money. She wants to donate it to the Stephen Lawrence Trust and the Stairway to Heaven Memorial Trust.

Guha does not know if the case will change any attitudes at the BBC.

“There’s a scarcity of characters on UK TV that reflect someone and many like me on the BBC and other channels,” she says. “Only a select few are allowed into the club and the draw bridge is quickly pulled up. Someone with my skin colour is invisible in commercials. Someone with my skin colour is pretty much irrelevant in dramas. But when it comes to being made fun of, someone of my skin colour has become fair game and, according to the BBC, this is in the name of national stereotype-based humour.

Guha says that if someone like her is not included in a meaningful way in the media as a memorable character that people from any background can relate to, but present only as a racial stereotype, then she does not feel she is allowed to be British.

She hopes the case will change the culture of people being afraid of speaking out and challenge tired old ways of treating those of different backgrounds in the media.

“Many actors feel the same way I do and I don’t blame them for wanting to preserve their careers, but if everybody complains together, things have to change,” Guha says. “Many members of the public feel this way too. I really look up to Lenny Henry for sticking his neck out the way he has. As for me, a friend recently told me; “If you stick your neck out…. you’re going to lose your head! We’ll see.”