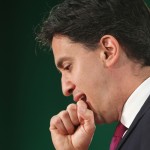 At last we’ve seen it. Something Ed Miliband cares about. Something that gets him fired up and passionate. A value to defend. He really loves white vans and England flags.

Emily Thornberry MP’s tweet apparently made red and white Ed angrier than he had ever been. Angrier, it seems, than the Tories carving up and selling off the NHS. Angrier, too, than the Lib Dems selling out millions of students by tripling their tuition fees.

Thanks to pressure from the left, Labour has finally committed to repealing the bedroom tax – but this toxic policy that has forced hundreds of thousands of Britain’s most vulnerable people deeper into poverty and into the food bank queues clearly didn’t make Miliband angry enough to come out and condemn it with the lightning speed he did Thornberry’s tweet.

Scandal after scandal has rocked the banking sector Labour and the Tories failed to rein in, while MPs have been no stranger to scandal themselves, their expenses fiddled and the evidence shredded. Wages have fallen, taxes on poor households have been hiked, the British countryside has been opened up to fracking, the Royal Mail has been sold off and our democracy has been sold out for a transatlantic free trade deal no one has ever been consulted on.

But what has made Miliband angrier than he has ever been? A tweet about a white van and an England flag.

In sacking Thornberry, Miliband has once again pandered to the right and to the politics of reaction. What party is ready to defend the progressive values Labour has long ago abandoned?

Left Unity, the party that was founded last year with the support of Ken Loach, held its first annual national conferencethis month, which passed a raft of policies that will go into our manifesto as we prepare to contest our first few seats in next year’s general election. We will also be fielding more candidates in the local elections, building on this year’s results in Wigan where we beat the Tories into fourth place.

I’m very proud that Left Unity’s policy – decided democratically from the bottom up rather than announced by any leaders – has come together to form a genuine alternative to the four main parties.

We agreed to oppose all fracking, bring the railways and public utilities back into public hands, and to support a massive expansion of green energy. We also support a new electricity tariff system that guarantees the free supply of a basic quota to all, balanced by higher charges for heavy users.

Left Unity believes education is a fundamental human right that should no longer be dependent on money, class or influence and that every family must have access to high-quality neighbourhood schools. This goes beyond well-funded state education. As well as making further and higher education free at the point of use, we want to bring back grants for up to six years. Academies and free schools should be brought back into local authority control and school field trips should be free.

Internationally, we want to scrap Trident and we are for a campaign of boycott, divestment and sanctions against Israel until it complies with its obligations under international law. We are applying for observer membership of the Party of the European Left, joining our sister parties Podemos and Syriza.

Although we are against military intervention in Iraq and Syria, we stand wholly opposed to the brutal evil of ISIS and its despicable violence, not least against women and minorities whose rights we champion. Despite this issue being woefully misreported, conference voted to work with local Kurdish organisations to support the progressive Kurdish resistance against ISIS.

Left Unity wants carers to be recognised as doing vital work, not seen as unemployed, and we want to abolish the Work Capability Assessments that have degraded disabled people. It is our policy that no one should be left with no income and that it should be a crime to leave anyone destitute.

These policies, and those on the economy, housing, healthcare and anti-racism passed at our last conference, will now go into our manifesto. It will be an uphill struggle for a new party of the left to fight for seats in a general election stacked against us. In what will be a close race between Labour and the Tories, we will not be fighting in marginals or against good left-wing Labour MPs as we do not want to let the Conservatives in through the backdoor.

But we are looking to target a selection of Blairite MPs in safe Labour seats because Ukip is not the answer to the stagnation of Westminister and its out of touch elite. People deserve a choice. They deserve a genuine alternative. They deserve to get angry about something more important than a tweet of a white van and some England flags.

This article was originally published in the New Statesman