Why we need the EU 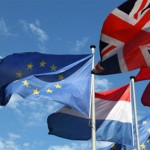 David Cameron is taking his sabre to the Netherlands tomorrow, rattling it like a toy rattles when it’s thrown from a pram. On the agenda: Britain’s future in Europe.

There will be the predictable xenophobic, nationalistic froth from the right calling for the UK to leave the European Union. Almost as dangerous, there will be calls to repatriate powers that protect British workers from the ravages of unchecked market forces unleashed upon them by one of the most out of touch, ideologically-driven neoliberal governments this country has ever seen.

That the reactionary right’s stance on Europe is so objectionable should not, of course, lead us to conclude that the EU is without flaws, that it has not itself imposed upon its member states neoliberal reforms or that some powers should not be repatriated. And certainly there is a democratic deficit in the EU which needs to be urgently addressed.

But we need Europe. Progressives need the EU. In no area is this more apparent than in the areas of tax, regulation and environmental policy.

The EU remains the best means of introducing effective policy on issues such as climate change and financial sector regulation which do not respect the arbitrary boundaries of the nation state.

When it comes to globalisation, corporations are well ahead of the game and nations are playing catch up. Companies operate across borders, but governments do not. Global negotiations to fight climate change are always going to go at the pace of the slowest member. And if the UN and the G20 are going to be held back by history’s biggest polluter, the US, then it is right that the EU should try to set a better example.

As the most advanced confederation of nation states in the world, the EU has the opportunity to show how strong cooperation on policy can be made to work to tackle issues that countries cannot tackle alone. It is leading the way not just on carbon taxation, but on financial sector taxation and tackling tax avoidance.

The EU’s modest efforts alone will not be enough and it too is forced to move at the pace of its slowest members, but for now it is the best means of coordinating cross-border policy to regulate markets and tame the most environmentally and socially destructive elements of capitalism.

As long as multinational companies can threaten governments with relocation to prevent them from introducing regulations or taxes they do not like, governments will need to work closely together to ensure fairness. Global corporations require global governance.

For all its faults, the EU is the single greatest project towards this. It must be improved, sharpened, democratised and, yes, reformed. But it must not be abandoned.

One thought on “Why we need the EU”