G8 to focus on tax transparency 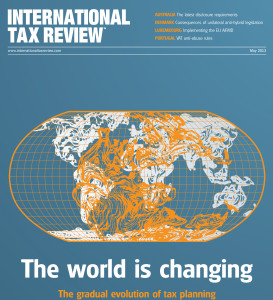 My editorial from the May issue of International Tax Review.

The leaders of eight of the world’s wealthiest nations will meet on the shores of Lough Erne in Northern Ireland next month. Such meetings are often held in remote locations to avoid the kinds of anti-globalisation protests that dominated the Genoa summit in 2001.

British Prime Minister David Cameron, who will be hosting the 39th annual G8 summit, has made it clear that tax and transparency will be at the heart of the agenda.

“We want to use the G8 to drive a more serious debate on tax evasion and tax avoidance,” Cameron announced. “This is an issue whose time has come. After years of abuse people across the planet are rightly calling for more action and most importantly there is gathering political will to actually do something about it.”

The prime minister pointed out that poorer nations are more desperately in need of revenue, but have less capacity to collect it.

Cameron also called for the G8 to lead a big push for transparency across the world to underpin the tax agenda.

“We’re going to push for more transparency on who owns companies, on who’s buying up land and for what purpose,” he said. “We can be the generation that eradicates absolute poverty in our world but we’ll only achieve that if we break the vicious cycle and treat the causes of poverty and not just its symptoms.”

Much of the focus on tax avoidance from governments’ point of view has been on corporate and individual wrongdoing. Cameron himself has called aggressive avoidance schemes immoral. But focusing only on the behaviour of multinational companies can let governments off the hook. These are the leaders of eight of Earth’s richest and most powerful nations. Insofar as they have a tremendous influence on setting the rules of the game, it is right that they should take it upon themselves to try to make those rules fairer and more transparent.

French President Francois Hollande last month called for the “eradication” of tax havens. But given so many of the world’s tax havens, such as the Cayman Islands and the British Virgin Islands, are British Overseas Territories, the spotlight falls on the UK government to do more. The charity Save the Children correctly pointed out that if Cameron does not take unilateral action against the UK’s tax havens, he could lose credibility for his G8 agenda. If the UK wants to convince more sceptical G8 partners to take action on transparency, then it is essential it sets a good example.

But as governments increasingly turn their attentions to tax havens and aggressive tax avoidance, there are signs the world of tax planning is ever so slowly changing. It is essential that companies keep a close eye on these developments to minimise their exposure to risk and reputational damage and shore up sound long-term business models.

One thought on “G8 to focus on tax transparency”