Guardian’s John Harris: Is it time for a left wing UKIP? 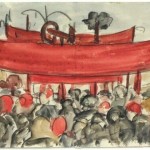 The Guardian’s John Harris has written a brilliant feature on the rise of Left Unity, which has hit the shelves just as Miliband prepares to face the wrath of the TUC conference as he presses ahead with his plans to reform the Labour-union link.

I spoke to Harris last week and he quotes me warmly and accurately:

“The GMB’s move was very shrewd, it was very useful,” says 28-year-old Salman Shaheen, a member of Left Unity’s national co-ordinating group, who has previously put in spells of activism for both the Greens and Respect, and has recently been punting around the Ukip comparison. “It’s saying: ‘If you’re not listening to us, we’ll reduce our funding accordingly, and maybe look at other campaigns.’ That’s not to say they’re going to throw that £1.1m they’ve taken away from Labour at a smaller leftwing party. Of course not: other parties need to prove themselves before they can attract that kind of backing. But we’re reaching out to the trade unions, and I hope we can attract union funding as time goes on.”

Now that Labour has vowed to “work within” George Osborne’s spending plans up to 2016 and grown fonder of the rhetoric of austerity, Shaheen talks about a “gravity swell” that could favour a new party. Though the Greens “are doing some great work out there”, he says it’s time for a force “with a more radical manifesto … I want to see a party standing up for old Labour values: a party by and for workers. And I don’t think we have that at the moment. So when Left Unity came along, I thought: ‘This is worth one more shot.'”

How does he feel about splitting the left vote – as happened when the SDP broke away from Labour in the early 80s – and thereby making the Tories’ lives much easier?

“The fact is, Labour is not offering us what we need,” he says. “If we want something different, we have to stand up and fight for it and build it. Otherwise we’re never going to have it.”

Even if you end up with a very nasty Tory government rather than a Labour administration that might have its faults but would surely be preferable?

“Yeah. The point has come where many people feel that that’s something they’re prepared to do.”

CND general secretary and former Children’s Laureate Michael Rosen are also quoted calling for a new party of the left. The time is right. The wind is in our sails. Let’s do it.