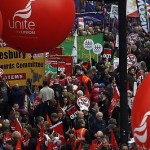 It had been almost a decade since I’d last stood in Hyde Park to protest something terrible. On 20 October last year, it was bad to be back, desperately trying to stop another government ruining millions more lives, this time not with bombs but budget cuts.

Perhaps the most unusual sight that day was the leader of the Labour Party bravely taking the stage to provide, what then seemed, the first rumblings of opposition. When Miliband admitted that Labour, too, would have to implement cuts, he was loudly booed.

Today Miliband will face even louder boos as he bravely tells the TUC conference that he will press ahead with his decision to reform Labour’s link with the unions.

Another word for brave is stupid.

Miliband’s plan will do him no favours. It will lose him support from the trade unions who backed his increasingly isolated leadership, it will cost Labour millions in much-needed battle funds in the run up to what looks likely to be a closely fought general election, and it will do little to boost the party’s poll ratings among an electorate that regards Labour’s internal machinations as fairly insignificant next to things like affording to eat.

But reforming Labour’s link with the unions is good for the left, both inside and outside of Labour, and, consequently, good for democracy.

The far-left has long been calling for trade unionists to break with a party that does not have their interests at heart. It is a curious irony that the link is being reformed from the Labour side, but as GMB and Unison have already moved to slash funding and party affiliations, the unions, too, are beginning to question that link.

The availability of millions of pounds of union political funds no longer being channelled into the Labour Party by default opens up space for smaller progressive parties, such as the Greens or the nascent Left Unity movement, to compete for union favour.

The Holy Grail of the left, union support, could see smaller parties wield increasing influence. But this is not just good news for those who have turned their backs on Labour. Despite their ostensibly competing priorities, a powerful movement to the left of Labour strengthens the position of the left in Labour. New Labour long ago made the tactical calculation that it could rely on its working class base no matter how far to the right it shifted. If Labour’s working class base abandons it, then the left in Labour will be able to make the case that only by reclaiming its old, progressive positions will it be able to regain the support of its base.

The reformation of the age-old link makes this ever more important. Now Labour cannot rely on some divine right to claim union support, it must compete for it by actually listening to the working class people it was founded to represent.

This, in turn, is good for democracy. For too long the main parties have fallen over themselves to trumpet the interests of big business. The concerns of multinational corporations have set the agenda, while those of the majority of British society – what Occupy might call the 99% – have gone unheard. But if Labour and other parties are forced to compete for millions in union funding, it will ensure they are at least listening to what workers want.

Miliband has done the right thing for the wrong reasons. The non-issue of Falkirk has already been forgotten, he will face a chorus of disapproval and he will cost his party millions. But he might just have inadvertently saved the left and British democracy.

This article was originally written for the New Statesman