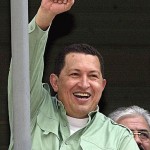 Hugo Chavez was a divisive figure; he polarised his country and the world’s media.

Critics will point out the dangers of the cult of personality he seemed to be building around himself, but he was far more than just another Latin American populist.

Chavez was a staunch opponent of imperialism, the Iraq war and George W. Bush. Sometimes he bought too heavily into the idea that his enemy’s enemy was his friend, forging questionable alliances with the Iranian and Libyan regimes. But Chavez inspired a continent that had too long been seen as America’s back yard to stand up for itself, leading a pink tide across Latin America.

Countless books and column inches will be written about his life in the days and years to come, but one thing should be remembered above all else.

Hugo Chavez spoke for the poor and he backed his words with actions. In redistributing Venezuela’s land and wealth and pouring its vast oil revenues into healthcare, education, housing, food and social programmes, he raised the quality of life for his country’s most destitute. And as a result, they voted for him. Despite his charisma and cult of personality, Chavez was ultimately a democrat, not a dictator, and he was a successful one.

As Venezuela prepares to elect his successor, the world will be watching to see if the legacy of Hugo Chavez will burn as brightly as his life.