Hugo Chavez: The revolution is bigger than one man 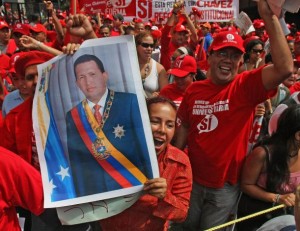 Hugo Chavez took on imperialism, he stood up to George W. Bush and he fought poverty, but one battle he could not win was against cancer.

As Venezuela enters a period of mourning for their President, Chavez leaves behind a nation divided.

Reviled by the rich, revered by the poor, at times praised and scorned by the Western media, he polarised global opinion as much as he polarised his own country.

Chavez was a hero to the left, but he was a flawed one. He built a cult of personality around himself and he built questionable international alliances with the Syrian and Iranian dictatorships, too willing to buy into the idea that his enemy’s enemy was his friend.

But Chavez himself was not a dictator, despite what his conservative critics say. He won the vote of the poor majority because he spoke for them and he backed his words with actions.

Unlike many of Latin America’s loudest populists, Chavez stood fast to his programme of social reform, even when economic conditions were against him.

He redistributed the country’s wealth and he ploughed its vast oil revenues into healthcare, housing, education and food for its most destitute people. In doing so, he raised millions out of absolute poverty.

For all his faults, and for all the valid criticisms that should be raised of him, the world must never forget how one man helped make the lives of some of its poorest citizens better.

But the revolution is far bigger than one man. Chavez’s death leaves a vacuum in personality, but not in politics. The people he inspired, the people he taught to learn their constitution, the people he raised onto his shoulders so that they could see what could be achieved with their collective endeavours will not forget the progress they have made in the last 14 years. Nor will they be willing to go quietly back to America’s yard and offer themselves up to the ravages of the failed neoliberal policies that brought them so much misery.

“Whenever death may surprise us, let it be welcome if our battle cry has reached even one receptive ear and another hand reaches out to take up our arms,” another flawed left-wing icon once said.

And Chavez’s battle cry to the poor has reached millions of receptive ears, not just in Venezuela, but across Latin America as a pink tide sweeps a continent finally willing to stand up for itself.

Venezuela now stands at a crossroads, but Chavez’s death is not the end of the revolution. It was always far bigger than him.

One thought on “Hugo Chavez: The revolution is bigger than one man”