Salman Shaheen speaks to Ken Loach about the director’s hopes for founding a new party to the left of Labour, and what it can learn from new media and the social movements that have built up around it. 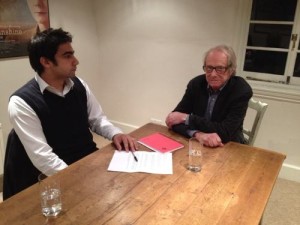 Ken Loach has just returned from Ireland where he has been shooting Jimmy’s Hall, a film following 1930s communist leader James Gralton’s quest to open a dance hall. It was widely reported earlier this year that this would be Loach’s last feature film. According to his colleague at Sixteen Films, producer Rebecca O’Brien, a Ken Loach film requires a tremendous amount of physical and mental stamina and Loach is not the kind of man to sit still in a director’s chair.

When I meet Loach at Sixteen Films’ office, a creaky old building on Wardour Street with Lilliputian wooden-beamed ceilings and warm white walls studded with posters of past glories from the director’s distinguished career, he is happy to sit still for twenty minutes. But behind his measured, methodical speech, that energy and passion remain. For Loach is helping to found a new political party – Left Unity – in answer to the political vacuum that has existed in Britain for decades.

“When Blair took over and won Labour’s first election with the slogan ‘Labour means business’, some thought at the time this means they’re going to roll up their sleeves and get to work,” Loach says. “Actually it means Labour means big business. Which means the working class have no political representation.”

The absence of a strong voice on the left became particularly problematic when a Labour government marched politically unopposed into Iraq, despite the majority of the country standing opposed to the war.

Loach believes the Greens are alone among the political parties in not standing up for the interests of big business. As far as he is concerned, the Green Party has many good qualities, but he does not see it as a party of the organised working class, and that is what he wants to help build in Left Unity.

The biggest obstacle to founding a mass party of the working class in Britain, however, has always been the party that was originally founded to be just that: Labour.

It would be a struggle to consider Labour now as a party of the left. But despite moving away from its working class roots and adopting a free market philosophy, Labour has made a number of important gestures towards the left under Ed Miliband. The pledge to repeal the bedroom tax surely must be high up on any lefty shopping list come election time, and the promise of freezing energy prices plays well to hard-up households squeezed by falling pay in real terms and a rising cost of living. So is now really the right time to be founding a new party of the left? Shouldn’t we just be backing Labour?

“Some people will say we should be backing Labour now, but on the critical issues Labour won’t make any structural changes,” Loach replies. “They won’t take the Royal Mail back into public ownership. They won’t give us a publicly owned energy policy. They won’t take the structural decisions that will change the economy so that we can have a planned economy and plan our resources.”

“Also we know the kind of market economy the Labour party supports will not provide full employment,” he adds. “It won’t give jobs to all our young people. It won’t manage change, for example in the case of the shipbuilding cuts which have just been announced, where I must say Miliband’s behaviour was appalling. His position on Grangemouth was shocking, where he called on the union to desist from campaigning against the multinational boss who was going to shut it down and put people on the dole.”

Loach wants to see instead a party that will propose structural changes in terms of common ownership and democratic control and an economy that works in the interests of everyone, not just the few.

Left Unity has attracted a lot of support over the last year. Over 10,000 people signed up to Loach’s initial appeal to discuss founding a new party of the left, and more than 1,000 members have joined in the last two months.

However a common criticism of Left Unity comes from people who agree with its principles, but argue that the most urgent task is kicking the Tories out and that it is unwise to split the left vote.

“That’s always been the cry, and that means you never develop an alternative,” Loach says. “Labour has moved to the right because the political space for social democracy has closed. It was based on a mixed economy – part publicly owned, part privately owned. That didn’t work. Now almost nothing is publicly owned. If we don’t take this chance to establish an independent voice of the left, when shall we do it? As Miliband Senior said, one of the biggest obstacles to developing socialism in this country is the Labour party. Pity his sons didn’t learn the lesson.”

The triumph of hope over experience

Left Unity is not the first attempt to unite a fractured left into a significant force to the left of Labour. The Socialist Alliance and Respect – both of which Loach supported – both had their successes. Both ended in failure.


“You could say trying again is the triumph of hope over experience,” Loach smiles knowingly. “But there is no alternative. You have to keep banging on the door until it opens.”

Loach acknowledges that clear mistakes were made in both the Socialist Alliance and Respect. Despite the attention the media has paid to him as a prominent supporter of Left Unity, he is keen to point out that it is not the Ken Loach party. Nor should a party be built around one or two people, however occasionally brilliant they are.

“It’s got to be really accountable, really democratic,” Loach says. “We can’t have parties within parties. We have to make certain all elements within Left Unity are represented in the central grouping. They’ve got to be there from the beginning, we can’t have it controlled by one platform. We’ve got to be absolutely rigorous about the contributions, the finance, where the pennies go.”

And there is one important lesson Loach wants everyone to learn, which rings as true in a party of the left as it does in the playground: “don’t shout and abuse each other”.

“There will be differences and it wouldn’t be much of a party if there weren’t,” Loach says. “It’s not the fact there are differences, it’s how we deal with the differences that will decide whether it works or not.”

UKIP of the left

At the beginning of the year, as Left Unity was just starting out, Loach was quoted calling for a UKIP of the left. It’s an intriguing image to some, ghastly to others. But what exactly does he mean by it?

“A UKIP of the left is a rather glib phrase that doesn’t stand up to close scrutiny,” Loach admits. “All I meant was a successful party to the left of Labour as UKIP appears to be a successful party to the right of the Tories. We need a party that has a thought-through programme, that uses language which is attractive to everyone who is against the austerity programme, who is against the imperialist wars, who wants to defend the environment.”

For Loach, the core principles from which everything else spreads are socialist ones: common ownership, democratic control, a planned economy, no discrimination.

Part of the inspiration for Left Unity can be found in Loach’s latest film, The Spirit of ’45, a look back at the foundation of the welfare state through red tinted glasses and how the dream came undone by Thatcherism.

Many people today, especially the younger generation, have organised around much more modern forms of media through highly inventive movements such as Occupy, UK Uncut and Anonymous that have taken the political establishment by surprise. But what does the veteran filmmaker think about such new media?

“I think social media has a huge part to play in engaging people in politics,” Loach says. “We filmed some discussions with younger people which we didn’t put in the final film because it seemed like a token presence. When they read the Labour Party manifesto that it fought the 1945 election on, and the constitution of the Labour Party, they said we’d vote for that, we’d vote for common ownership and democratic control, we’d vote for the projects the ’45 manifesto outlined.”

As far as Loach is concerned, how Left Unity operates has got to be tied to new media and young people who understand it must be centrally involved.

“I don’t, I’m the wrong generation,” Loach laughs. “I’m still a pen and ink man. But we certainly need people who will organise the way Occupy organised and UK Uncut organises. I’m full of respect for them and in awe of how they organise.”

The challenge as Loach sees it, is to use social media to draw people into the movement and set up events, while maintaining a democratic organisation to which everyone can contribute and not just at the end of a mobile phone: “If we can do that, that would phenomenal”. Left Unity will be holding its founding conference on 30 November at London’s Royal National Hotel. It has taken a year’s hard graft from all the people involved to get the proto-party to this stage and Loach has one final message for everyone attending the conference.

“A lot of people will have a lot of things to say, some of it quite diverse,” Loach says. “Keeping to the agenda will be difficult. It’s got to be handled very skilfully, so that everyone emerges feeling we made the best use of the time, we’ve got the best result we can, and no one has been defeated, we’re all part of something we can all share and believe in even if we didn’t get everything we want into the statement [of aims], that our opinions are respected.”

He smiles and laughs naughtily like a little boy with a kestrel might once have done sticking two fingers up.

“If we’re going to be a broad party, there will be many people coming in who don’t share the well-defined set of ideas some of us who have been around these kinds of projects for a long time have,” Loach says. “They should be welcome nonetheless. The balance is keeping the centre of the project intact, while making everyone welcome. It’s gonna need some skilful chairing.”

Ken Loach may be best known for his skill in the director’s chair. But if his hope triumphs over experience and Left Unity succeeds where so many others have failed in founding a new mass party of the left and the working class to provide a genuine alternative to austerity, then he will have helped achieve in the field of politics what so many of his creations achieved through adversity: something.