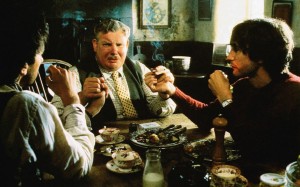 I was saddened today to hear of the death of Richard Griffiths.

There were many roles in which he glowed, not least as Hector in The History Boys. But his standout performance for me was as the flamboyant, predatory thesp Uncle Monty in Withnail & I, who wept in butcher’s shops, thought the cauliflower more beautiful than the rose, never got to play the Dane, but came close to having Paul McGann, even if it had to be burglary.

The older order changeth, yielding place to new. God fulfills himself in many ways. And soon, I suppose, I shall be swept away by some vulgar little tumour. Oh, my boys, my boys, we’re at the end of an age. We live in a land of weather forcasts and breakfasts that set in. Shat on by Tories, shovelled up by Labour. And here we are, we three, perhaps the last island of beauty in the world.