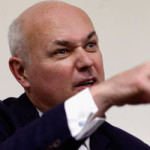 After Iain Duncan Smith claimed he could live on £53 a week in benefits instead of his £1581 a week post-tax salary, he was challenged by an online petition to put his money where his mouth is.

Within a day the petition attracted more than 200,000 signatures.

Petitions are hardly the strongest form of political protest, and this is something of a stunt, but my name is on that list because I think there is a worrying disconnect between rich politicians and the real world.

If Iain Duncan Smith were to take the £53 a week challenge, I wouldn’t expect to see a road to Damascus, or for this die hard dyed in the wool Tory to abandon his long-held ideological commitment to neoliberalism. But at least it would show the man whose bedroom tax is to make 660,000 people living in social housing £728 per year worse off the everyday effect of his policies.

It is little surprise that a cabinet dominated by millionaires has consistently acted in the interests of its class with expensive tax giveaways to society’s richest individuals and the world’s biggest corporations, while clawing back money from Britain’s poorest. It’s basic self-interest, which displays a tragic lack of empathy for those less fortunate.

Sticking Cameron’s cabinet on £53 a week would in itself be a stunt. But in the age of rich public school boys being parachuted into safe seats without having any experience of life outside Westminster – the struggle for jobs and daily budgets far more demanding than anything Osborne has had to get his head around – it might just be a necessary wakeup call.