Save Lindsay Sandiford: British grandmother sentenced to death in Indonesia for smuggling cocaine 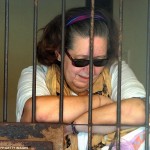 Today, Lindsay Sandiford, a grandmother from Cheltenham, was sentenced to death in Indonesia for smuggling $2.6 million worth of cocaine.

“It is well known that Indonesia takes a very intolerant approach to drugs trafficking and the death penalty for breaking such law is not an extraordinary sentence in this respect,” Freya Zaiwalla of Zaiwalla & Co Solicitors told me. “However in view of the fact the prosecution asked for a lesser sentence, the concern is that the Indonesian Court should not apply the death penalty arbitrarily as a deterrent to others.“

Sandiford’s sentence must be commuted. The UK government must leverage all its diplomatic weight to spare her from the firing squad.

Not because she is a British citizen. A red passport doesn’t give you immunity from the laws of other countries.

Not because her crime seems hardly fitting of such a severe sentence.

Not because she says she was coerced into smuggling after a gang threatened her children.

Not because she has a history of mental health problems.

But because the death penalty is a barbaric and inhuman punishment and we must stand universally opposed to it and appalled by it.

Indonesian judges say the penalty is apt because she has damaged Bali’s image as a tourist industry. But what could be more damaging than lining up a British tourist and shooting her at night.

The war on drugs has claimed enough lives.

We the British people must do everything we can to convince the Indonesian state not to murder one of our citizens.

One thought on “Save Lindsay Sandiford: British grandmother sentenced to death in Indonesia for smuggling cocaine”