Once again it seems everyone’s favourite morning bog roll, the Sun, has proved its ability to break intelligent, thought-provoking, evidence-based investigative reports that challenge our preconceived notions and strike at the heart of our prejudices.

I’m talking here about it holding up Lithuanian mother Natalija Belova and the benefits she apparently claims as an example of immigrants “comin’ over ‘ere spongin’ off us'” and living like royalty. 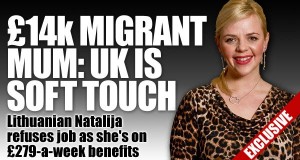 As Phil over at A Very Public Sociologist points out, the Sun’s claim Belova nets more than £14k in benefits just doesn’t add up:

But The Sun is deliberately lying. Belova does not receive an income (remember, they explicitly stated *income*) of £400 plus because she never sees two of the benefits payments. Until April, Housing Benefit is paid directly to her housing provider and the Council Tax payment bypasses her and goes to the relevant local authority. What is left, just £76, on top of her £125/week from her job gives her a *real* income before tax of £201 – about half of what The Sun’s says she pockets. One wonders how a single mum with a small child can afford luxury holidays and designer clobber on such a modest income, especially when in a year she actually receives just £10,452

Hardly a king’s ransom. But what the internet is really up in flames about is a Politics UK report that the woman the Sun decided to hold up as an example of the ills of immigration is in fact an actor – a scene that could have been stolen straight from The Thick of It as life imitates art.

Of course, acting’s a difficult profession and jobs can be few and far between, but the fact the Sun neglected to mention her career does raise some pertinent questions about the validity of their story.

Of course, everyone’s second favourite morning bog roll, the Daily Mail, didn’t need to wait to check the validity of anything, they saw their chance to pounce on a vulnerable minority and took it.

All of this takes us away from any serious debate about the economic impact of immigration, its benefits and its drawbacks.

Let’s drop the bogey men and the scapegoats. Lithuanians didn’t make the banks lend recklessly, single mothers didn’t cause the financial crisis. For that we have to look much closer to home.

It’s time for us to stop blaming the poor.