We live together or we die alone 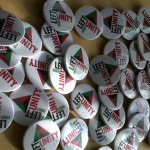 On Saturday, a hundred people descended on a London hotel because they wanted to change the world. Like many, I went along to Left Unity’s first national meeting full of hope, but also dread. Because the path to that room was littered with the decaying corpses of a dozen other worthy projects to unite the left. If we cannot learn from their mistakes, ours will soon join them.

Some people have voiced their concerns on this website that Saturday’s meeting overwhelmingly voted in favour of a one member one vote organisation and against allowing observers to the national coordinating group from established parties such as the SWP, SP, TUSC, AWL, CPGB, WP, ACI, ISN or any other collection of letters in the alphabet.

But the biggest mistake we could make would be to forge a new party as a patchwork banner of existing far left groups hung out for election time and then left to gather dust.

Left Unity should be open for members of all groups and none to join. They should not be expected to leave their politics at the door, forget their affiliations, or be denied to right to form whatever factions they choose. But no group, old or new, mass organisation or splinter, should have the right of veto or special status that elevates them above individual members.

One member one vote is the only way to ensure democracy, transparency and accountability. If members of other groups wish to take part in the national coordinating group, they should do so as full participants, not observers. After being elected.

I for one am glad that members of the SWP, SP, TUSC, AWL, CPGB, WP, ACI, ISN and others were at Saturday’s meeting after being elected representatives of their local groups. I’m also glad we had people there who have been involved in Occupy and UK Uncut. I’m glad we had Greens, trade unionists, anarchists and disaffected Labour supporters tired of seeing a weak response to Cameron’s class war. I hope that all of these people will continue to participate in this vital project for Left Unity.

We have a long way to go. But we can make it if we work together.

Of course people will continue to be active members of their own organisations. We should welcome and support that. But Left Unity needs its own active membership base. It cannot just be a collective cloak worn once a year for elections and then discarded.

Together we should be taking part in the anti-cuts campaigns, the struggle against the bedroom tax, the fight to defend our NHS, our environment, our nation and our world. We must be with the poor and the oppressed that we seek to represent every single day. Only then do we have the right to ask them for their vote come election time.

Every second we are divided is another second the rest of the country doesn’t care. It’s another step closer to privatisation for the NHS; another life destroyed, like Stephanie Bottrill’s, by the government’s assault on Britain’s most vulnerable.

We have to live and work together. Or we die alone, our corpse left to rot beside every other failed project to build that better world we could see but never reach.

This article was originally written for Left Unity