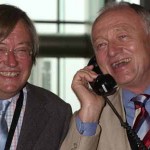 I was on Ken Livingstone and David Mellor’s LBC 97.3 show this morning, speaking in support of Ed Miliband’s plan for a 10p tax rate funded by a mansion tax, and how I would go about cracking down on tax avoidance in the unlikely event George Osborne were to call me up.

My favourite moment came after Mellor suggested Labour returning to its ideological roots spelt a return to class war and I said it was the Tory government that had declared war on the working classes. In response, Red Ken called me a communist. High praise indeed!

You can listen to the full interview here

One thought on “Appearance on LBC Radio: Ken Livingstone & David Mellor interview me on tax avoidance and the mansion tax”