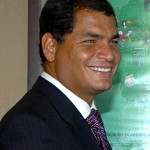 Rafael Correa swept to power in 2007 on a ticket of helping the poor. His election in Ecuador spelled a pink tide in Latin America as the once powerful parties of the conservatives and the liberals fell to new working class movements across the continent from Venezuela to Bolivia.

This was not the old communism that had failed Europe; it was an indigenous answer to the devastating neoliberal policies enforced on America’s back yard by the IMF.

Despite one of the worst financial crises the world has ever seen, Correa kept this promise. Unlike the British government, he did not turn on the poor when the going got tough. Those with the weakest shoulders were not asked to carry the heaviest burden.

Through financial regulation, construction projects, job creation, expansion of welfare, health and education, debt defaulting, raising taxes and renegotiating contracts with foreign oil companies, Correa turned the economy around in the interests of the poor.

Rafael Correa’s re-election with 58% of the vote is a ringing endorsement of his policies and proof that there is an alternative to neoliberal austerity. The British government should take note when it says you cannot spend your way out of recession.