Ten years since we marched against the Iraq war 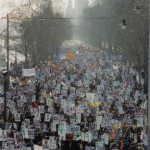 It has been a decade since two million people turned out on the streets of London to tell Tony Blair that his war in Iraq was not in our name.

I remember that cold February day, assembling by Cleopatra’s Needle (another throwback to Britain’s colonial past) with my hippy friends. The moment I arrived, I knew it was unlike any of the other demonstrations any of us had ever been on. It was not just the hardened leftist activists, the socialists and peaceniks who had turned out with their banners and their slogans. This was Britain, the majority silent no longer, telling the government the Iraq war was wrong.

We couldn’t stop the war. Nothing could. It had been planned far in advance. And this notably left many for whom this was their first ever taste of political action disheartened.

But we were right to speak out and Blair was wrong to ignore our concerns. There were no weapons of mass destruction. The war plunged Iraq into chaos. The Islamist terrorists who’d had no foothold in the country before flooded in. Hundreds of thousands of civilians were killed.

And though we couldn’t prevent the invasion of Iraq, we helped halt the Bush-Blair war machine from marching into Iran. In our collective endeavour, united with all peoples of the world, we wrote the narrative on that chapter of history and proved we could not be brought along on the aggressive neoconservative misadventures of our vain leaders.

Bush and Blair are gone. And while the tainted legacy of their wars remains, history will remember that we were on the right side. Let that serve as a lesson to anyone wishing to follow in their footsteps. Let us not forget.