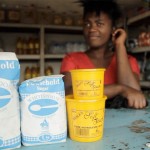 When driving through the town of Bury St. Edmunds in Suffolk, it’s hard not to notice that something stinks. From miles around you can see the plumes of thick white smoke billowing into the sky from the sugar factory; the whole area is pervaded by its sickly sweet smell.

Halfway across the world, however, its parent company, Associated British Foods, is up to something much more rotten.

Zambian Sugar, a subsidiary of ABF, follows Google, Amazon and Starbucks as the latest in a string of corporations to be exposed for tax avoidance.

There will be the usual hoo-ha about the corporate tax a company pays not representing its true contribution to society because it’s creating jobs and growth etc. But let’s put this in context.

Life expectancy in Zambia is just 40 years in a country where 68% of people live below the nationally recognised poverty line.

Zambian Sugar has done nothing illegal. But when its transactions to tax havens cost the country 14 times more than it received from the UK in aid to combat hunger and food insecurity, it’s hard to say it hasn’t done anything immoral.

Quite frankly, it stinks.

Think about how much bad press multinational companies have received for avoiding taxes in the UK, then consider how much worse it will look in a country so poor that tax avoidance is a matter of life and death. Tax revenue helps fund hospitals and sanitation to keep people alive and it funds education to help them strive for a better standard of living and a sustainable future.

The pressure is now on for ABF to pay its taxes in Zambia and act not just according to the letter of the law, but its spirit.

ActionAid is encouraging people to write to George Weston, Chief Executive of Associated British Foods, to encourage him to address the situation.

But the issue is far bigger than one sugar company. Rightly, ActionAid and many other charities, have come together under the banner of the IF campaign, to fight against tax avoidance and push for country-by-country reporting so the world can see which companies are aggressively avoiding taxes in which countries and say this stinks.