David Cameron frequently reaches back into history, so why not apologise for the Amritsar massacre? 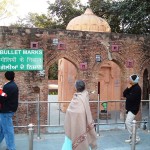 In 1919, when soldiers under the command of Brigadier-General Reginald E.H. Dyer massacred between 379 and 1000 Sikhs, Muslims and Hindus assembled in Amritsar’s Jallianwala Bagh garden, the British Empire was the greatest superpower the Earth had ever seen and India was its prize acquisition, a jewel shining bright under a sun that never set.

Nearly a hundred years later, India is fast emerging as an economic superpower while David Cameron is on a charm offensive to drum up business for a broken Britain.

But even as Cameron holds out his begging bowl to now mighty India, he has refused to formally apologise for the Amritsar massacre.

Curiously, Cameron said that it would not be right to “reach back into history” and apologise for the wrongs of British colonialism.

Like much of the vacuous platitudinous drivel that slobbers forth from the Prime Minister’s mouth, it’s a phrase that doesn’t make much sense.

Cameron reaches back into the history of the British Empire all the time.

“Britain never had the biggest population, the largest land mass, the richest resources – but we had the spirit,” Cameron said in his keynote speech to the Conservative conference in 2011, conjuring the spectre of a people who once ran India with one man and a dog to gee up the party faithful in these tough times.

Delivering a speech at the Imperial War Museum in October last year, Cameron reached back into history again to pull out a £50 million fund to mark the centenary of the First World War, something that  “captures our national spirit in every corner of the country, something that says something about who we are as a people”.

In 2010, on the anniversary of Charles de Gaulle’s June 18 radio appeal from London to the French resistance, Cameron said it “could have been made nowhere else than from among the sole free people on earth which continued to resist the forces of Nazism with all its might”.

The point is Cameron is frequently prone to reaching back into history. But he only ever plucks out the positives he wishes to draw from Britain’s past. There would be nothing to stop him reaching back one more time and apologising for the Amritsar massacre.

But for Cameron, “sorry we shot your great-grandfather” seems to be the hardest word to say.

One thought on “David Cameron frequently reaches back into history, so why not apologise for the Amritsar massacre?”