Ed Balls should not fall on his sword, Britain needs him 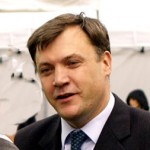 In an open letter to the Shadow Chancellor, historian Anthony Seldon has called on Ed Balls to “fall on his sword” for the good of his party’s electability.

According to Seldon, dropping Balls from front line politics would help Labour lose its tax and spend image.

But I would humbly suggest that while Seldon is adept at analysing history, he is not so good at looking at the present.

Austerity is not working. Keynesian economists warned from the start that the neoliberal Tory programme of cutting public services for the nation’s poorest while cutting taxes for its richest would only entrench the crisis and the misery it has brought. With last month’s revelation that the economy shrunk by 0.3% in the final quarter of 2012, making a triple dip recession a dangerous probability, they have been proved right.

The effect is Labour’s biggest poll lead over the Conservatives in almost a decade. Clearly it is not the ghost of Labour’s tax and spend roots that is putting off voters, but the Tories’ far more reckless and toxic project of slash and burn.

Balls is an asset to Ed Miliband in a time of failing austerity.

With wages stagnating and the cost of living increasing, his call for a temporary VAT cut is exactly the stimulus the economy needs and will put spending money back in the pockets of the poor who are always worst affected by this regressive tax.

With inequality soaring, headline grabbing redistributive measures such as restoring the 10p tax bracket funded by a mansion tax are electoral gold dust.

With the public up in arms about the world’s largest multinational corporations dodging taxes in the UK, Balls’ calls for transparency in the financial system are tapped into our time.

With an urgent need to kick-start the economy, create jobs and provide affordable housing, Balls’ desire to build 100,000 new homes provides an answer.

Ed Balls does not have all the answers. He could be bolder in promoting a more radical Labour economic plan that provides a true ideological alternative to Tory austerity. But his ideas are a necessary start.

In the end it will be history, not historians like Seldon, which judges Balls’ ability to come up with a plan to steer Britain out of economic catastrophe. But to suggest he fall on his sword now when his ideas are so vital for the country’s poor is madness.

2 thoughts on “Ed Balls should not fall on his sword, Britain needs him”