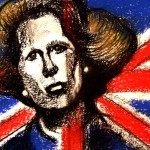 It’s a curious irony that with the death of Margaret Thatcher and the release of Ken Loach’s The Spirit of ’45, the two great ideological consensuses of the 20th century should return to sharp focus at the same time.

Both ideologies emerged from a country in ruins. On the one hand, a spirit of unity, solidarity and class consciousness sewed together a nation torn asunder by war. On the other, a state-sponsored sense of competition, aggressive individualism, and personal gain tore apart working class communities and threw them to the winds: some soared, others fell.

Contrasting the almost polar opposites of the post-war and Thatcherite consensuses, it might lead one to conclude that Thatcher – in selling off council houses, crushing the unions, destroying traditional working class communities and privatising the economy – made Britain a fundamentally more selfish place. A place of aspiration, yes, but one where people stood on each others’ shoulders not to reach higher together, but to trample their neighbours into the dirt for one more rung up the ladder.

I was surprised by the reaction of some traditionally working class school friends to Thatcher’s death.

“I think we have too many foreigners and it was a hell of a lot lower when she was in power,” said one. “I also think we have a major problem with benefit scrounges. What’s wrong in working hard for what you want and need? Why should things be given on a plate or easy to acquire? Why shouldn’t the people who work harder have more?”

She went on to say that Thatcher shouldn’t be hated for introducing poll tax because council tax is even more unfair – making those who are better off pay more. Meanwhile, she displayed little sympathy for those who had come from an even more disadvantaged background, buying into the tabloid myth of mass benefit scroungers.

“I come from nothing but have worked my arse off to get something for myself,” she said. “Why should I be punished for that? We have a benefit culture because Labour made it so easy for people to sit on their fat lazy arses and still have a decent wage.”

Whilst built on a lot of misconceptions, this argument is hardly uncommon and is typical of the post-Thatcher line the Sun and the Daily Mail try to push every day, encouraging working class people to look not to the banks which caused financial catastrophe, or big corporations dodging taxes for the reason Britain is in such an economic mess, but to blame those more vulnerable than themselves, benefit claimants and immigrants.

But has Thatcher really succeeded in making Britain a more selfish place? Not so according to a YouGov-Cambridge poll which shows Britons continue to favour state responsibilities over individualism.

The evidence would seem to suggest that while traditional working class communities may have been broken down, Britain has not emerged into the 21st century a fundamentally selfish country.

In an age of welfare cuts being sold to the country on the line of tackling a grossly exaggerated “something for nothing culture”, this poll is encouraging news. Labour has so far been timid in taking the government to task on austerity, particularly by abstaining on workfare.

On this evidence, Ed Miliband should feel emboldened to be more strident in his opposition to Tory cuts, in shifting the political centre to the left, and burying the Thatcherite consensus. Reading between the lines of his speech in Parliament on Thatcher’s legacy – surely as much about himself as it was about the former Conservative Prime Minister – suggests he would like to see himself as a conviction politician breaking the mould.

Now is the time to be bold. Now is the time for him to build a new post-Thatcherite consensus around cooperation, not competition for a Britain of solidarity, not selfishness.