Pakistan Calling: Still hope at the end of the line 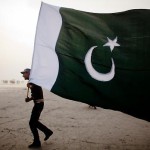 Squashed beneath the seat of a train bound for Karachi, a frightened young boy hides in the hot dark from armed men searching for people who pray to a different god. Leaving behind his Mysore home that day in 1948 when Gandhi was assassinated and India was aflame with anti-Muslim violence, my father, like so many fathers and mothers of British Pakistanis, was looking to find hope, freedom and safety in the world’s newest nation.

Today that dream rests on a knife-edge. A British Council study on Wednesday found that 96% of young Pakistanis believe the country is heading in the wrong direction. They are pessimistic about the economy and the state of democracy and 40% would like to see sharia law introduced. A DFID report on the same day found that British aid to Pakistan is being undermined by widespread tax avoidance and corruption. It isn’t hard to see why the reports are gloomy.

Whilst not a failed state, Pakistan faces mounting challenges which threaten to turn it into one. The country sees weekly suicide bombings and escalating sectarian violence against its Shia, Hazara, Hindu, Ahmadi and Christian minorities. Some 60 million people (one in three) live in poverty. Half of adults, and two out of three women, are illiterate. One in 11 children die before their fifth birthday, and 12,000 women die in childbirth every year. Almost half of children under five suffer from stunted growth, which affects brain development and their ability to learn. And this situation won’t necessarily improve. Pakistan’s booming population – set to double over the next couple of generations to more than 300 million people – will put an ever greater strain on housing, education, water, transport and healthcare as the country struggles to survive.

Yet despite these challenges, Pakistan stands on the cusp of achieving its first democratic transition of power between two elected governments unmarred by the military coups that have plagued the nation in its past. Pakistan’s ability to survive its convergent crises owes much to the resilience of its people and their determination to save the nation they, like my father, journeyed over a thousand miles to create. From the furnace of partition, new institutions like the Edhi Foundation were forged. What began as one man in a van providing medical aid to the poor has now grown into hundreds of hospitals and a fleet of ground and air ambulances. It’s an example that has inspired many others.

The wealth of progressive initiatives and programmes in Pakistan, however, rarely make the front pages. A new partnership Pakistan Calling – set up between the Samosa’s Anwar Akhtar and the RSA think tank – now aims to showcase some of this work.

The project provides a forum for young filmmakers in Pakistan (and the UK), in which they can challenge perceptions of today’s Pakistan and provide the basis for constructive cross-cultural dialogue between Britain and Pakistan. With approximately 1.2 million people of Pakistani heritage in the UK – part of a global diaspora stretching back many decades, Pakistan Calling aims to serve as a conduit to nourish Pakistan’s links with the diaspora community in Britain to aid development.

Akhtar wants to draw attention to the wider crises Pakistan is facing, not only by engaging the British Pakistani community, but by aligning the Department for International Development (DFID) with its interests and the interests of Pakistani civil society. He believes DFID and the Foreign and Commonwealth Office have not had strong access to networks within the British Pakistani community. But with the help of the RSA, he wants to set up a new model for cultural discourse to support education and development.

Despite the problems of tax collection – a fundamental aspect of any successful nation state – Britain must not turn its back on Pakistan. Tackling poverty and building a prosperous democratic Pakistan will help not only millions of poor Pakistanis, but also improve stability in the country, the region, and beyond. We must not forget that Pakistan is a nation of great potential. In Karachi and Lahore, it has two bustling metropolises that could rise to become global cities. It is rich in resources and arable land, has a highly skilled professional class and an ancient history. In many respects, it has all the raw ingredients to make the kind of successful global nation state that India is fast becoming. But it also has all the toxic elements in violence, corruption, poverty and religious extremism that could lead to its undoing if its strained civil institutions are not given the urgent help they need.

Like my father hiding beneath that train seat 65 years ago, Pakistan is perilously close to danger. But in the end, my family made it to Karachi where they flourished and my grandmother, Mumtaz Shirin, went on to become one of the nation’s pioneering authors and the kind of cultural producer for whom Akhtar wants to provide a platform. Because at the end of the line there was hope. There still is.

This article was originally written for the New Statesman