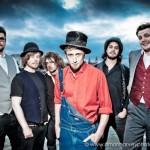 This article was originally written for The Third Estate

Tankus the Henge are a rambunctious explosion of sound, a chaotic cyclone of influences ripping through the backstreets of New Orleans, Argentine tango halls and gypsy caravans of Eastern Europe.

Led by the gravelly vocals and flashy showmanship of their manic frontman Jaz Delorean, frantically juggling an accordion and steaming keyboard, this five-piece carnival of a band is far more than your average rock outfit. The upbeat riffs of Louis Schultz-Wiremu’s saxophone, textured backing vocals of Dan Mason and frenetic pace set by Will Stanley waging war on his drums and Tim Fulker playing his guitar like a blind unicyclist on a tightrope belie a darker stream of lyrical consciousness.

“The music we play, like the country we live in, is a melting pot of styles and times, with the fundamental aim of making you dance, and if you’re one to listen to lyrics then there’s more to hear than mindless repetition,” Delorean tells me. “Lyrical and musical influences come from the Beats, the Beatles, Tom Waits, QOTSA, Stevie Wonder, Cat Empire and anything else we can get our ears on.”

The band has built up quite a following among their loyal London fanbase and on the festival circuit, from Glastonbury to Bestival, where dreadlocked crusties and tuned-in beatniks scream the words they know so well.

But among the befeathered and bespectacled and sparkling Nathan Barleyites of Dalston’s Passing clouds, they had a virgin audience to win and win it they did. Barred by the venue from their usual array of pyrotechnics and acrobatics, Tankus were forced to rely on musicianship and stage presence and they did it to good effect.

Taking the crowd through a catalogue of catchy signature tunes such as ‘Smiling’ and freshly-penned and highly polished material, they soon had a packed-out room dancing, sweating and screaming into the early hours.

As they sing, “smiling makes the day go quicker”, but no one wanted the night to end. When the call came for one more song, it wasn’t “ironic”.

Perhaps Dalston’s hipsters were just waiting for the cred of discovering some new obscure band their friends had never heard of before. But as appearances at the Edinburgh Fringe and the Olympics last year showed, Tankus the Henge won’t remain that way for long.

Easily the best up and coming band in London right now, Tankus the Henge are stars of the future and ones to watch.

The band’s self-titled debut album will be will released on itunes and spotify on March 13, backed by a UK tour.