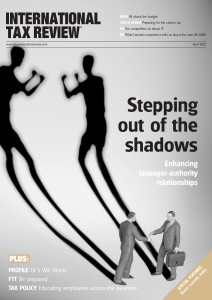 My editorial from the April issue of International Tax Review.

Osborne faced a particularly rough ride this year, even with a tax agenda which has been broadly welcomed by British business.

After all, with the UK losing its cherished AAA rating from Moody’s, unemployment rising and GDP shrinking by 0.3% putting the country on course for an historic triple dip recession, it is clear Osborne’s policies thus far have not worked.

Multinationals will be celebrating that the Chancellor once again cut the rate of corporation tax. But as successive corporate tax cuts have so far failed to stimulate sufficient investment to return the UK to steady growth and create much-needed jobs, it may be that Osborne has been cutting the wrong tax at the wrong time.

Osborne should now seriously consider a VAT cut back to 17.5%.

Cutting VAT would help businesses by putting money back in the pockets of consumers, stimulating spending and giving a boost to the retail sector which has been hit hard with the disappearance of a number of famous high street brands such as HMV.

Across the world we have seen a shift from direct to indirect taxation. VAT is an attractive tax to raise for governments because the fact that people do not see it immediately coming out of their pay packets means it is politically less fraught. It is also an instant boost to revenues. Spain, Finland and the Netherlands are three countries which recently raised their VAT rates, while China is expanding its successful pilot to more regions and industries. India is also keen to introduce GST once disputes between the central and state governments have been resolved.

But raising VAT also carries with it a compliance cost for businesses which must update their systems, and can hit profits as companies decide whether to up their prices and pass the increase onto consumers, thus hurting sales, or absorb the costs themselves.

And VAT also has political dangers. The US is alone among the world’s major economies in not having a VAT. As one adviser noted, VAT was first discussed in the US as far back as 1976, but successive administrations have been reluctant to introduce it because they’ve seen that in other countries, politicians who have enacted VAT for the first time have often been voted out of office at the next election.

But for the rest of the world, the shift from direct to indirect taxation shows no sign of abating as cash-strapped governments look for a quick fix. The wise government, however, might look to the long term benefits a VAT cut could bring for companies, their consumers and their economies as a whole.

Some countries have been using targeted VAT cuts to boost certain sectors of the economy. Ireland’s positive experience of cutting VAT for the tourism sector shows this tactic can be effective in stimulating key industries.

The British tourist industry has been pressuring the government for a similar cut, but it is not on the agenda. A broader VAT cut is not either. However if Osborne’s tax policies continue to come up short in encouraging growth, he may have to seriously consider one.

One thought on “VAT’s enough”