Margaret Thatcher’s death is nothing to celebrate, her legacy lives on 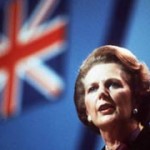 They say you should not speak ill of the dead, so I shan’t be writing any long obituaries. Thatcher was my ideological opposite, after all. Born in the year of the miner’s strike, I was too young to remember much of her time in power, but looking back on her record, I can only conclude she made Britain a worse, more unequal place.

Many will draw the opposite conclusion, pointing to her strength in the face of enemies at home and abroad. And her death will be as polarising as her political life.

There will be a lot of people on the left for whom Thatcher’s death has been too long coming. Even in Cambridge – hardly a hotbed of proletarian revolution – King’s College student union voted to set aside £40 for a party in the event of her demise a few years back.

But Thatcher’s death is nothing to celebrate. Quite apart from the morbidness of celebrating anyone’s death, it serves no political purpose. Not because Thatcher in her twilight years was irrelevant. Quite the opposite. The Thatcherite consensus built on the grave of the post-war one is stronger than ever.

Major, Blair, Brown, Cameron and Clegg have ensured that Thatcher’s legacy will live on as Atlee’s is buried deeper and deeper. If we are to change that, it is her arguments we must demolish, not her tomb.